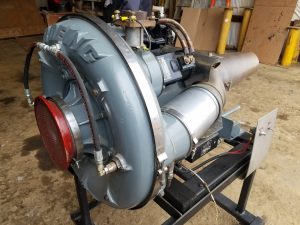 been nearly 10 years since I last owned a turbine engine, so I’m quite excited to have taken ownership of this Boeing 502-10C engine. I shall now embark on another adventure of getting a Boeing 502 up and running. Let the fun begin! 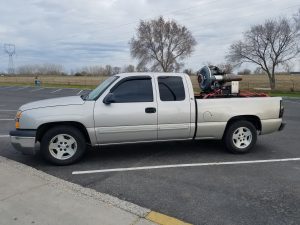 First things first: getting the turbine home. I made the 13 hour round-trip journey in a single day between Spokane and Portland. The return leg was the most fun, as it’s not too often you have a turbojet in back of your turbine huller. As it turns out, a turbine also makes quite the conversation piece at gas stops!

Once home, I was able to start going through the engine. The oil filter has been removed already and it looked like it was in need of replacing. Being around 50 years old, I didn’t exactly think I could run down to NAPA for a new one. 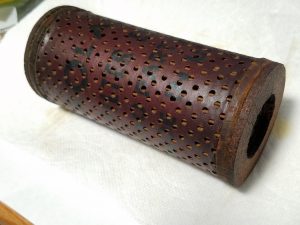 I tried tacking down an original one based on the model number printed on the filter, but no luck there. However, by doing a filter search by dimensions, I was able to track down a filter that was very, very close. As it turns out, I did purchase it from NAPA, go figure. Filer: NAPA Gold #7328. 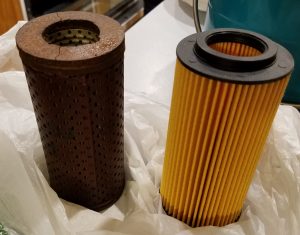 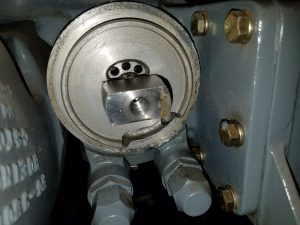 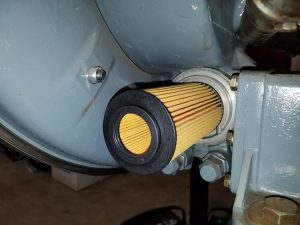 In the photos, you can see the new and old filters side-by-side, along with the mounting location of the filter onto the engine. 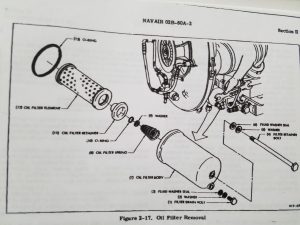 The oil filter is contained within the oil filter body, and attached to the engine with a long bolt. Those components I have. However, not included are the oil filter retainer and spring. So those I’ve had to come up with myself.

For the retainer, I cut a 1.5″ disc from a sheet of steel, then used my TIG to tack weld two small steel rods to it for the purpose of centering the retainer. A 3/8″ hole was drilled in the center for the bolt to pass through.

I was able to find a couple potentially suitable springs at my local Ace. I’ll be using the non-tapered one. 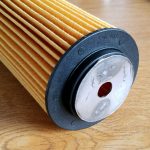 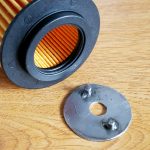 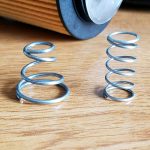 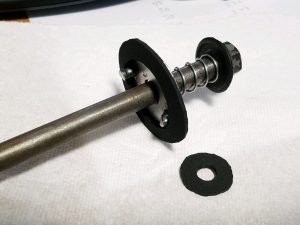 The filter retainer was completed by cutting some custom Viton rubber gaskets. The small one seats immediately below the spring and hugs the bolt.  Viton rubber is ideal for this purpose and is specifically OK’d for use with jet oil, Mobil 254 in my case.

Away from the mechanical side of things, there’s a lot to accomplish with various electrical components for this engine. There’s the tachometer generator, J-type thermocouple for oil temp, K-type thermocouples for the engine exhaust temp, plus I need to add an oil pressure sender to keep track of oil pressure. There’s the issue of a missing fuel shutoff solenoid valve, fuel pump, testing the starter relay, etc. No shortage of projects here! Which is a big reason for me getting this engine, to give myself some fun stuff to work on!

The engine has a -4AN male fitting on the side that 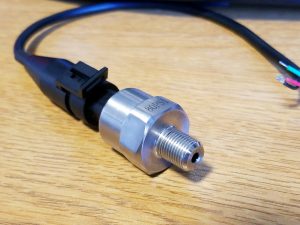 can be used to mount an oil pressure gauge. Since my goal is to read all sensors digitally, I’ve opted to use an electronic pressure sender. To the right is an 80psi unit I found inexpensively, which is rated for oil. The sender outputs a linear voltage from 0.5V to 4.5V, linearly correlating to pressures from 0 to 80psi.

In order to evaulate the pressure sensor, I hooked it up to my Arduino microcontroller’s analog inputs to read the voltage and convert it to a pressure reading. Mechanically, I used a small regulated air supply and 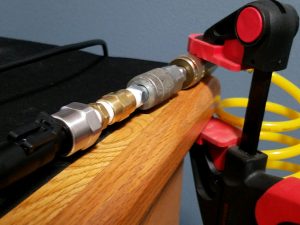 connected that to the 1/8″ NPT port on the sensor. I varied the pressure linearly from 0 to 80psi in approximately 5psi intervals, which were then plotted to reveal how linear this sensor actually was. 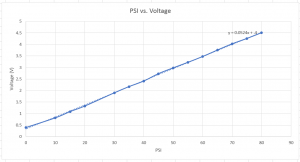 Looks pretty linear to me! The advertised 0.5V at 0psi was incorrect though, as it’s closer to 0.4V, but the 4.5V does correlate to 80psi, so just some calibration adjustments to do there software-side.

Near the oil drain port is the oil temperature thermocouple. I removed it from the engine and tested it as a K-type thermocouple. There were no clear indications of which wire was positive/negative, so I used a magnet to determine that. On a K-type sensor the magnetic wire is negative. Upon reading a voltage, I found it was reading backwards. That’s weird. I know I had the wires correct. After some more testing I was able to determined that I actually had a J-type thermocouple. That makes sense since it’s magnetic wire is positive, reverse of that of a K-type. So I needed a circuit that could properly read a J-type sensor. 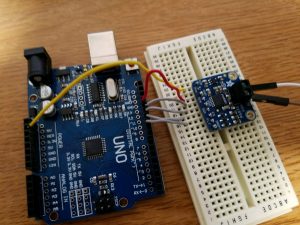 Adafruit has a real nice breakout board for a MAX31856 chip, which is capable of reading a variety of thermocouple types, including J-type. Upon its arrival I hooked it up to my Arduino and was successfully able to read the J-type. For testing, I heated some water to near boiling and measured its temp with a conventicle thermometer and compared it with the thermocouple readings. They matched very closely.

The engine drives a tach gen at a 10:1 ratio. With max RPM of the engine set at 37,500, the tach gen will spin at 3,750 rpm, equating to 100%. A traditional percent RPM gauge can’t be used with this engine because they typically equate 4,200 rpm from the tach gen to be 100%. I tested the tach gen itself with both a frequency counter and an inexpensive oscilloscope. It puts out a nice sine wave with variable voltage (max 21V at 4,200 rpm). 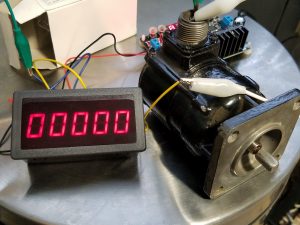 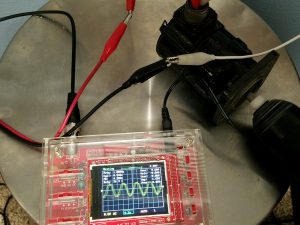 I’ll be calculating rpm using the Arduino by rectifying the sine wave (that is, by sending it through a diode and only using the positive voltage portion of the wave). I’ll then be able to count the number of cycles over a period of time, hence frequency. 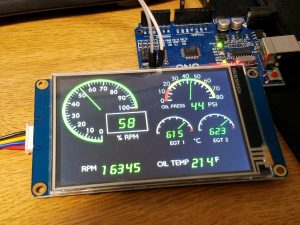 of the coolest portions of this project is coming up with a digital display to show the readings from all the sensors, including EGT, oil temp and pressure, and engine RPM. For this, I’ll be using a Nextion 3.5″ display. Majority of the graphics are created in Photoshop, while “live” graphics will be used for things like the indicator needles and numerical text. 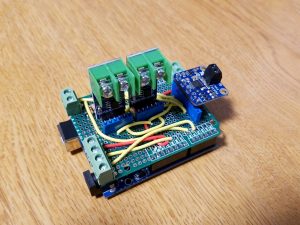 I needed to come up with a custom board that can interface with all the various sensors as well. This board can plug directly into the Arduino.

The completed control panel consists of the Nextion screen, 3 rocker switches and a push-button for starting. The back of the board shown here is a bit messy, but it’ll get cleaned-up a bit with wire ties and such. 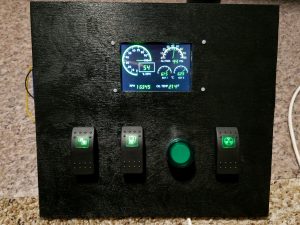 I also added a 25′ cable that will run between the Arduino (to be mounted to the engine stand) and the control panel. That should let me stand a decent distance away (unlike many I’ve watched, I’m not about to stand next to this thing!). Can never be too cautious! 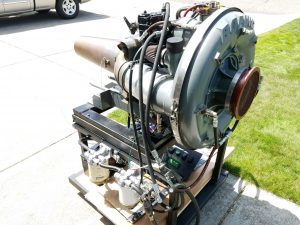 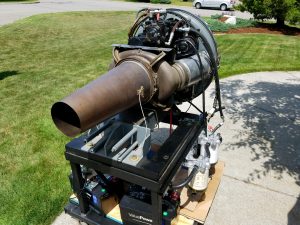 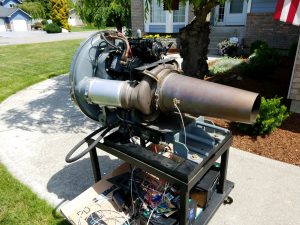 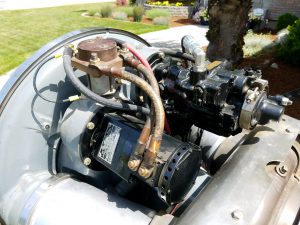 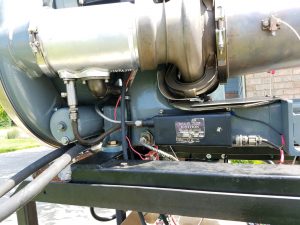 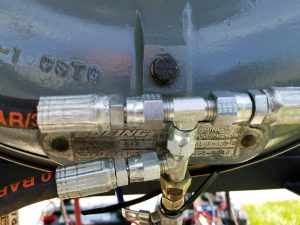 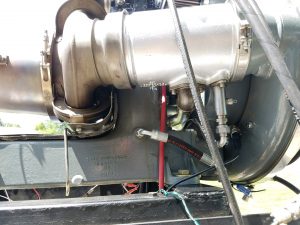 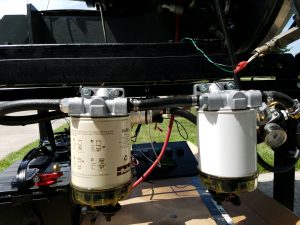 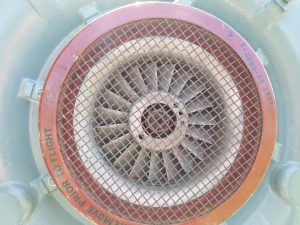 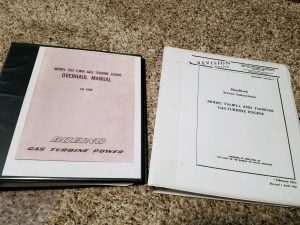